Antrim County Lawsuit: Do Citizens Have a Right to an Audit? 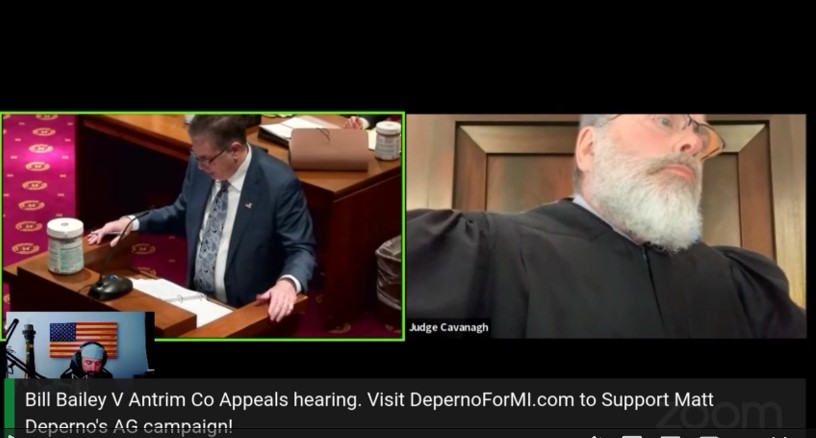 On April 12, 2022, the Michigan Court of Appeals heard oral arguments on the plaintiff’s appeal of trial court Judge Kevin Elsenheimer’s decision to dismiss the Bailey v Antrim County lawsuit. In addition to being an important case with respect to exposing the election fraud which occurred in the 2020 election, it is also an important defense of our constitutional right to an audit.

Thanks to Brian Lupo, you can see and listen to the proceedings by clicking on the photo below:

The initial election results in Antrim Country reported that Joe Biden NOT Donald Trump won in this perennially red county. Subsequent recounts determined that 7,060 votes were shifted from Trump to Biden in a county of where only 16,044 ballots were cast.

The discovery period of the lawsuit revealed significant anomalies indicative of election fraud. The evidence revealed in expert reports can be viewed at DePernoLaw.com.

On June 25, Judge Kevin Elsenheimer dismissed the lawsuit on the basis of his assertion that the plaintiff’s remedy (an audit) had already been performed by the Secretary of State.

§ 4 Place and manner of elections.

Sec. 4.  (1) Every citizen of the United States who is an elector qualified to vote in Michigan shall have the following rights:

Sec. 31a.  (1) In order to ensure compliance with the provisions of this act, after each election the secretary of state may audit election precincts.

This case is about a voter’s right to conduct a statewide audit of the 2020 election pursuant to the Michigan Constitution.

This case boils down to one question – whether or not Article II Section 4 provides an individual right to an open-ended audit of statewide elections? If the answer is no, the plaintiff’s argument is moot.

Every case (e.g. Constantino and Genetski) that has examined this question up until now, has determined that constitutional right to an audit is not an individual right.

Court inquiries seemed to revolve around the following issues:

What are the likely decisions which may be issued by the Court of Appeals?

The Court may simply reject the appeal and support the decision made by the trial court judge.

The Court may rule that MCL 168.31a limits the constitutional rights of citizens expressed in Article II Section IV of the Michigan Constitution and is therefore unconstitutional.

NOTE: Constitution did not specifically call out MCL 168.31a. It simply said “as prescribed by law”. There are other statutes which provide investigative authority thereby addressing individual rights to audit.

The Secretary of State has been negligent in her duties by not complying with the statutory requirements of MCL 168.31a. The Secretary would likely then be required to update the state Post-Election Audit Manual to extend beyond ballot recounts and include documents, ballots and procedures as required by statute including documents and procedures specific to the electronic voting systems used in counties such as Antrim County.

The court could order that an audit of statewide election results be conducted.

The ruling that will be issued by the Michigan Court of Appeals will determine whether or not our constitutional rights to an audit of statewide election results have been infringed upon or enforced.

One thought on “Antrim County Lawsuit: Do Citizens Have a Right to an Audit?”