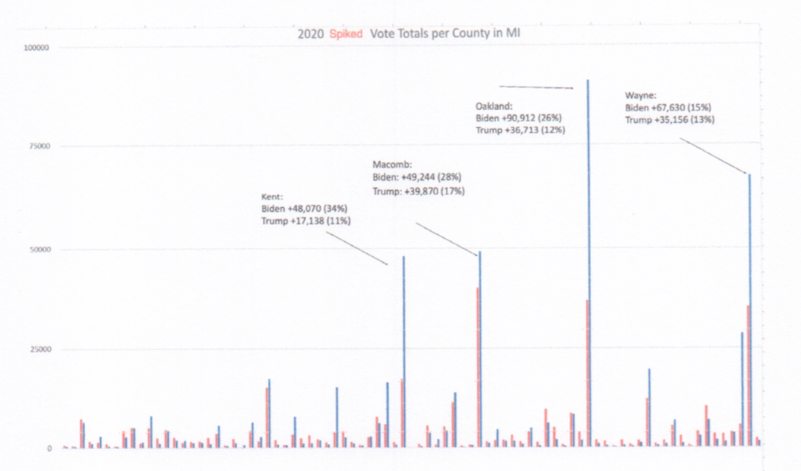 The election record chain of custody can be simplified into an evaluation of four basic election records: statewide voter registration file (known as the Qualified Voter File in Michigan), poll books, ballots and vote tallies.

Most election fraud “audits” currently focus upon the ballots. As discussed in previous posts, simple “recounts” of ballots are often disingenuously referred to as “audits”.

The next most popular focus of election fraud investigations are the poll books. Poll books are evaluated against ballot counts by election officials prior to certification. This could be referred to as a “book audit”. Election integrity organizations often engage in “field audits” referred to as “canvassing”. The purpose of these canvassing activities is to validate the voter data in the poll book.

What has been left out of the election record audit process to date? Arguably the most important data set of all – Vote tallies.

Josef Stalin is credited to have said:

While there is some debate over whether or not Stalin actually said that, there is no denying the accuracy of the sentiment expressed in that statement. Counting the votes is demonstrably more important than casting the votes.

Which begs the question “why more attention is not given to the chain of custody regarding the reporting of election night results?”

Why did the cumulative vote tally in multiple states suddenly drop to ZERO in the middle of the night?

Why were there multiple examples of negative vote increments reported on election night?

Why were more votes reported than could have possibly been counted during a given time period?

Over a 2 hr 38 min period, there was a vote spike of 384, 733 ballots across four counties. The scanners in those counties could only process 94,867 ballots during that timeframe. This leaves 289,866 ballots in question.

Clearly, an audit of the vote tally records for an election would yield answers to some very important questions…including who is the rightful winner of a given race.

How to Conduct a Vote Tally Audit

Any audit of a vote tally involving electronic voting systems needs to evaluate the following records as a minimum:

Once the aforementioned records have been obtained, the following analyses should be conducted:

A report should be provided that includes the findings of these evaluations along with recommended corrective actions.

There is much clamor around the need for a full forensic audit of elections. We need to make sure that the term “full” refers to the entire election record chain of custody and not simply all of the ballots cast in a given state. An audit of vote tally reporting is perhaps the most important election record to audit of them all.