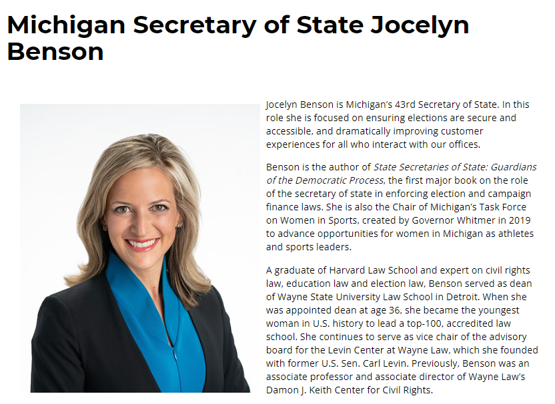 Is there evidence of statewide election fraud in Michigan?

In the case of Michigan, the main perpetrator is the Michigan Bureau of Elections operating under the direction of MI Secretary of State Jocelyn Benson.

What did she do? Her office issued the following directive to Michigan clerks all across the state.

Please note that the federal statute clearly says “…all records and papers”. The Bureau of Elections letter clearly releases all but the ballots from the obligation for retention 22 months after the election.

The Michigan Bureau of Elections has demonstrated a pattern of bullying clerks into compliance with their directives. They penalize clerks who attempt to follow the federal law by threatening to decertify their election equipment and even prevent them from executing their election oversight duties. The costs of replacing the decertified election equipment would be born by the governing jurisdiction of the clerk and they prohibit clerks from conducting manual tabulations of ballots within their jurisdiction.

The question remains, how many clerks have complied with this unlawful directive?

The Michigan Secretary of State is clearly attempting to destroy election records which would be investigated in the course of a forensic audit of statewide elections. Only the ballots would be preserved by clerks adhering to her directive. Ballots feed the narrative which suggests that recounts are valid indicators of election integrity. They are not. The questions remains whether or not federal authorities will take action to prosecute the Secretary of State for violations of federal law.

Keep up the good work, Patrick! If the Michigan GOP had any sense at all, YOU would be our Governor right now and we wouldn’t be having ANY of these problems. I believe in YOU! If there’s a way I can help, let me know!

In our opinion, Tom, vulgarity is unjustified no matter how horrible the act and, believe me. no one could detest the violations of our rights by Benson more than we do. We agree with you that Benson needs to be arrested and tried..

Patrick, Do you have access to Michael Lindell? If so, I would like you to ask him why the complaint to SCOTUS does not mention the strongest proof of the 2020 election fraud – – the packet captures?

Are is it no longer true?

We don’t have to wait for the politicized US Justice Department to act against a fellow democrat. The Michigan State Legislature should impeach Ms Benson! The constitution of MI. Allows a simple majority to impeach officers under Lt Governor. Surely this is low hanging fruit! Also Ms Benson would be banned from state office after that, so you won’t have to worry about her as Governor in the future.