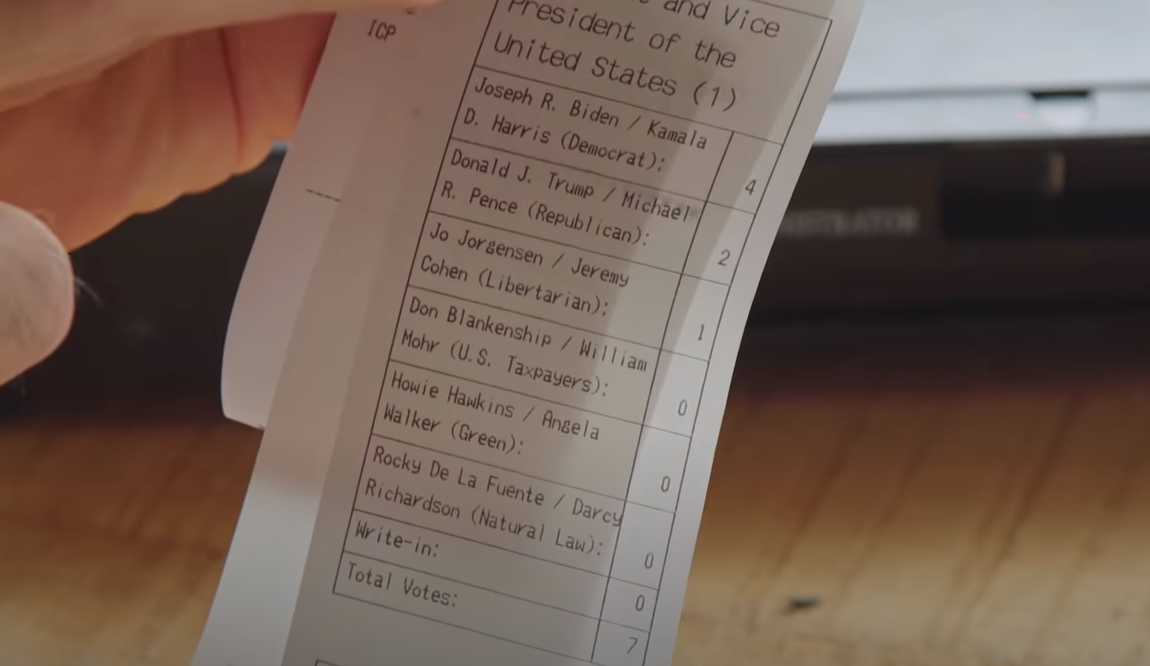 If you have been investigating election fraud for any length of time, you have likely come across one of the first documentaries on the topic called “Hacking Democracy” by Russ Michaels.

Well, One America News just released a video that demonstrates how the 2020 Antrim County elections were hacked. Attorney Matt DePerno and his team of experts show how a Dominion voting system configured with a Compact Flash (CF) Card configuration used to tally the vote in Antrim County does not produce accurate vote tallies. See for yourself in the following video.

Yes, YouTube removed the evidence of election fraud in Antrim County, MI. I left screenshot of censored YouTube post as a reminder of what we are up against when it comes to reporting the truth.

Thankfully, I downloaded a copy before they did so. You can now see OAN video on Rumble.

Clearly, votes were shifted…and this was using a Dominion voting machine loaded with Antrim County’s December 6th, 2020 configuration for CF Cards for an election that was conducted on November 3rd, 2020. The SQL Server Management Studio application featured in the demonstration was installed on Antrim County election equipment (See 8 April 2021 Antrim County, MI Election Management System Application Security Analysis by Cyber Ninjas). This software is NOT a component of the Election Assistance Commission (EAC) Dominion Certification Configuration. The presence of non-certified software alone, especially one that could modify the election results database with impunity, should be grounds for decertification of the 2020 election.

We may never know what the November 3rd, 2020 CF Card configurations were. We do know that the vote tally for the Presidential race changed by a whopping 5,754 votes between November 3 and November 5 for a community in which only 12,423 votes were initially cast for President. There was a 7,060 vote difference between the November 3 and final December 17 tally.

In lieu of full access to election records, an alternative theory for the vote switch has been offered by Professor J. Alex Halderman of the University of Michigan (See Halderman Report). This theory examines the impact of a mix up in reference ID’s in vote tally tables. It remains a theory and a dubious one at that in light of Professor Halderman’s previous assertions regarding the security vulnerabilities of electronic voting systems.

In a truly transparent election, we would have access to the physical ballots that were tallied on November 3, the CF cards as configured on November 3 and ALL of the electronic records pertinent to the municipality and county voting systems. We don’t. In fact, politicians, lawyers, media outlets, and election officials across the country have fought tooth and nail to prevent such transparency. Why is that? Molly Ball at Time Magazine has shared her insights on this topic.

It will now be up to our legal system to enforce transparency. Stay tuned for results.

Very informative…I just hope this information is actually used and not passed off as lesson learned then forgotten about. It needs to be used to weaken the democratic party to a point of irrelevance.

His website has simliar powerful info on banking, health, the media and several other topics. You can watch the video Hacking Democracy on vimeo here for a historical perspective.

We can’t let up, we have to keep sharing info like this, keep standing for the truth in the face of ridicule, disbelief and, sadly, even threats. The truth will set us free.

Sorry, would have to grade that an “F” on the election fraud articles — most substandard!

Instead, I would humbly recommend cavdef.org.

Well, we should all know the modern history of election fraud at this late date!

THE DEAN OF ELECTION FRAUD

Back around 1997 or 1998, an ex-convict, once convicted of multiple counts of computer–aided embezzlement, was figuring out an early version of the GEMS tabulator at the King County Elections Board, so he could program an interface for VBM software — or voter-ballot-mail-in code. He named it VoteRemote.

He was a budding criminal mastermind who evidently knew some rich backers and got them to finance his criminal enterprise of programming that GEMS tabulator to throw the election in the favor of the highest bidder!

A local voting machine expert/activist, Bev Harris, tipped off the right people and right media people who turned out to be wrong people, the crooked ones at King County Elections and the Seattle Times who all stonewalled — kept quiet — on his criminal background.

One lady who was in charge there, Julie Kempf, did end up finding out about his past as she became highly suspicious of him. She attempted to fire him and interdict his operation and was the victim of a false arrest and successful smear campaign by the local puppetmedia (Seattle Times, The Stranger, Seattle PI, local NPR station, KUOW, etc.). Ms. Kempf was framed by another ex-convict and crony of the programmer, Jeffrey Dean, named John Elder (president of Integrated Voting Systems in Washington state) and fired.

(Curiously, about the same time another lady in a Florida state gov’t agency was going through the exact same situation, and also involving election fraud programming, but seemingly unconnected to Seattle but involving both political corruption at the highest level and Chicom espionage. Believe Jeb Bush was the governor then?! The victim there was Mavis Georgalis, but the worst victim was Ray Lemme, the state investigator murdered!)

So back to Dean — the company he and his wife owned, Spectrum (founded with $$$ from a mysterious source????) — ended up being sold to a voting machine company who sold that early version of the GEMS tabulator, GES, run by sketchy dudes, and Jeff Dean joined them to “revise” that GEMS tabulator (see “Fraction Magic” video ) and help them with with his VoteRemote program — part of the deal — as well as doing a bunch of coding on the optic scan software for ballot readers, etc.

Within the space of a year or so, Diebold purchased GES, and Dean’s bud, John Elder, became a senior exec there, while Dean became a consultant on the tech side.

Lots more corporate buyouts but essentially what occurred is that Dominion Voting Systems — which had bought out Sequoia and Diebold, ended up with the finalized/criminalized version of Jeffrey Dean’s GEMS tabulator as did ES&S — the two voting systems guys who account for 80% or more of voting and also the remainder which use ballot readers or scanners utilize code also from Dean originally —– ergo, 93% of the code in the 2020 presidential election derived from one criminal mastermind, the dean of election fraud, Jeffrey Dean. (Sure, there have been version updates and extensions and localizations, etc., but the core criminalized code remained!)

After Bev Harris broke the story on the criminal backgrounds of Dean and Elder, the Seattle Times finally ran a story on it around 2004 or 2005, explaining that King County had dropped Dean’s software for them and instead purchased Diebold —- not mentioning that Diebold stuff they purchased contained Dean’s latest version of the GEMS tabulator!

I’m guessing here, but I suspect this was and is some type of election-fraud-for-hire scheme, which may explain why it has been used intermittently in elections: the 2004 presidential election; democratic primaries in 2008, 2012, and 2016, but oddly not in the 2016 prez election —- maybe they thought they could win it without fraud????? Definitely surfaced again in 2020!

Don’t know who is really behind this, in Florida it appears to have connections to the CCP, elsewhere could be them or the super-rich elites, etc.???

And let’s hope we kept current on ballot tracking as well?!

Curious string of circumstances there: this SoS of Colorado, Jena, pushed for the adoption of BallotTrax from i3logix.

The fellow with them was David Moreno, previously with Dominion (although that time is difficult to pinpoint, it appears 2007 to 2012 ???); prior to that he was with Sequoia and before that he was with Smartmatic — not necessarily suspicious — staying in the same industry, more or less.

So Dominion is headquartered in Toronto, but registered in America at Denver — specifically David Moreno’s apartment?!

Ballot tracking and election management systems (Dominion Voting Systems) are a bit different, but generally in the same industry, I guess?!

So for Moreno it was Smartmatic >>> Sequoia Voting Systems >>> Dominion Voting Systems (essentially the company formed with the purchase of the merged Sequoia and Diebold voting companies) >>> i3logix for the ballot tracking which will be adopted in Colorado, Georgia, Nevada, California, North Carolina and Washington, DC and in individual counties in other states such as Michigan, New York, Ohio, etc. >>> then back to Dominion Voting Systems (still at the same apartment).

I don’t know about others, but I see a definite pattern here!?