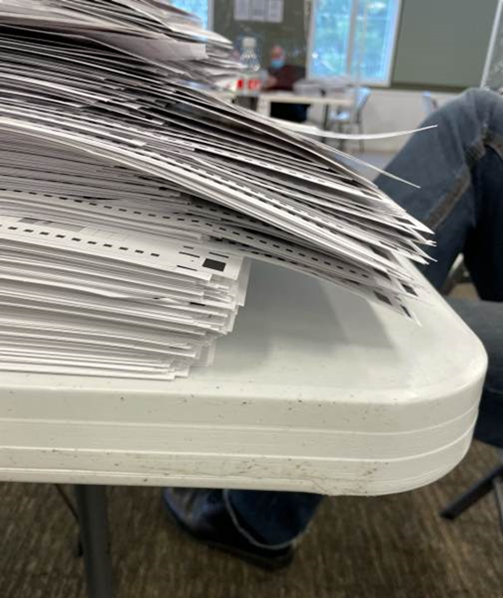 Many elected and election officials respond to allegations of election fraud with the narrative “just count the ballots”. So, can we determine the integrity of any election by just counting the ballots? No.

If you were given 100 one hundred dollar bills does that mean that you have $10,000? What would happen if you were to deposit those one hundred dollar bills in a bank? They would examine a sample of them to determine whether or not they were counterfeit. Only authenticated bills would be deposited into your account. If counterfeit bills were found, an investigation would likely ensue.

Why should it be any different for ballots than it is for hundred dollar bills?

How do you determine if a ballot is counterfeit?

Some states specify that ballots must be printed on paper featuring security measures similar to our currency. If a ballot is found which does not conform to the specifications of these secure ballots, it is likely counterfeit.

Does that mean that any ballot which is printed on secure ballot paper is genuine? No.

How do you determine if a ballot printed on secure ballot paper is genuine?

You need to follow the chain of custody for the ballot all the way to the voter who cast the ballot and validate the following:

Let’s look into each of these items.

How do you validate the ballot was secured?

You ensure there is a verifiable chain of custody for every transfer of the ballot.

What are examples of lawful ballot transfers?

In order to ensure that each of these transfers is lawful, every data transfer downstream of direct voter action needs to be accompanied by chain of custody verification.

The documentary 2000 Mules provided evidence of ballot trafficking in battleground states during the 2020 election which appears to be unlawful.

How do you determine if a voter is eligible to vote?

The primary criteria pertains to:

Each state has slight variations on residency requirements which can get quite complicated when it comes to military ballots and Americans living in other countries.

Why the disclaimer “theoretically”? Before one can be certain that an individual listed in the statewide voter registration is indeed an eligible voter, the integrity of the statewide voter registration database must be validated. Does it contain dead voters or voters which have moved outside of the state? Are the voters in the database even real people. A 2022 Michigan Auditor General attempted to assuage concerns over the integrity of the Michigan Qualified Voter File. They were unsuccessful. See the RELATED CONTENT section for more information.

Once we have validated that an individual is indeed an eligible voter, how do we determine if they actually cast a given ballot? The simple answer is “we can’t”. We have secret ballots in America. Just before a ballot is cast, the stub containing the tracking ID tying a specific ballot to a specific voter is ripped off to preserve the anonymity of the voter. This is a good policy to have in the cancel culture era in which we live, but it does impede investigations into election integrity.

Be wary of anyone who asserts that the integrity of any election can be determined by “just counting the ballots”. Either they don’t understand how elections can be subverted or they are complicit with the subversion. Ultimately, only a full forensic audit of the entire election record chain of custody can determine whether or not an election was conducted with integrity.