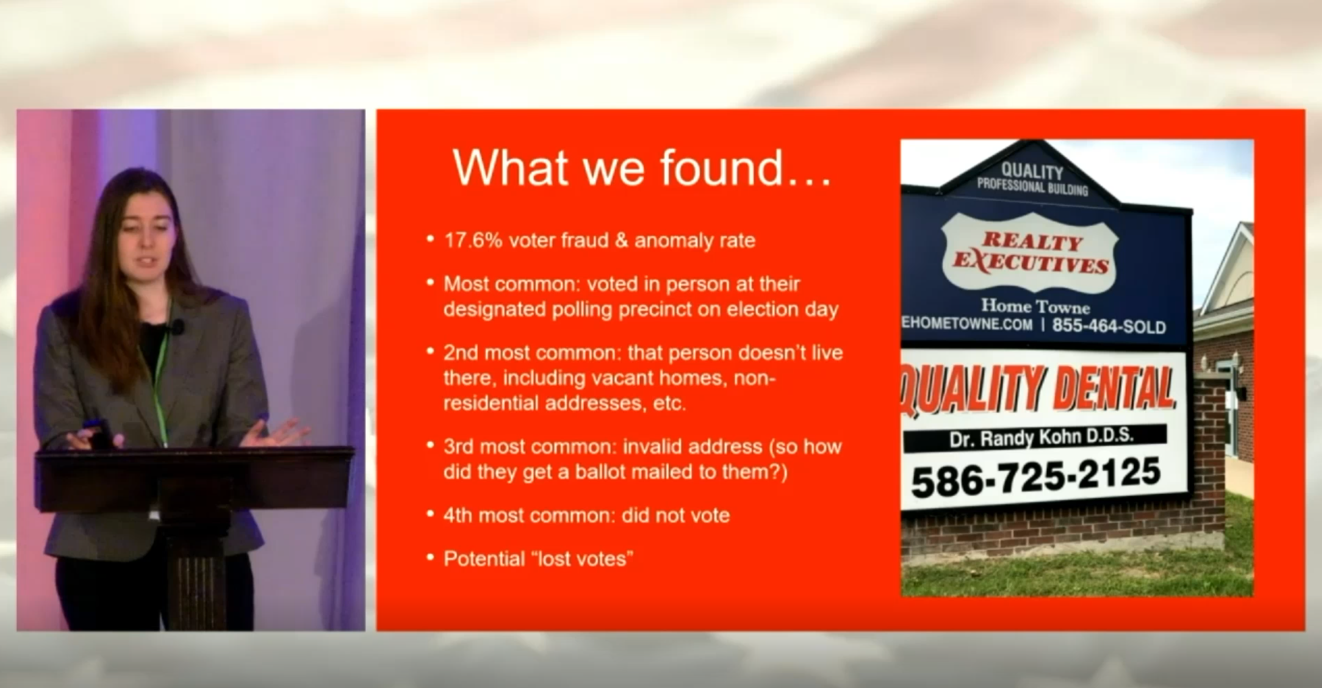 Jacky Eubanks is a former elections worker at the Chesterfield Township Clerk Office in Macomb County where she specialized in the processing of absentee ballots.  She quit her job as a Congressional staffer in the wake of the 2020 election as a result of disgust with the lack of investigative action by state legislators.  She formed a group of fellow citizens called the Concerned Citizens Initiative.

Prior to the 2020 election, the absentee voter process in Michigan was a bottoms-up process initiated by the voter and featuring data provided by local clerks.

In theory, the signatures on the absentee voter application, driver’s license and voter registration master card should all match.  In practice, they often don’t.

What happens if a clerk’s office receives two absentee ballot request forms for the same person that feature two different signatures?  The clerk would check it against the QVF.  What happens when the QVF doesn’t match the signature on the absentee ballot request form?  The clerk checks it against the signature on file with the master card.

What happens when the master card is blank or simply has the QVF signature printed on it?  Clearly, further investigation is warranted.  Such investigations were often not possible during the 2020 election due to the record number of mail-in votes.

The state’s list of fake voters would be very useful information to anyone seeking to match them to ballots in a ballot factory and the state had conveniently entered into a data sharing agreement with the progressive organization Rock the Vote prior to the election.  Rock the Vote would not even need to change or delete election records to have some very useful data to share with anyone complicit with election fraud.

By centralizing the key information flows in the absentee voting process, the Michigan Secretary of State was successful in weakening the integrity of the state mail-in voting processes.

This is why the canvassing efforts of Jacky’s group, Concerned Citizens Intiative, is so important. Through their canvassing efforts, the group found that 17.6% of the people contacted resulted in an anomaly akin to what Dr. Frank’s analysis predicted. In other words, 17.6% of the 494,219 votes cast for President in Macomb County were likely fraudulent. That translates to as many as 87,489 fraudulent votes in only one out of Michigan’s eighty-three counties.   If this 17.6% anomaly rate were to be found in other counties, as many as 974,917 votes may have been cast fraudulently in Michigan against a reported margin of victory for Joe Biden of 154,188.

In addition to these anomalies, canvassers noted that there was greater than 100% voter registration in the majority of cities in Macomb County.  Voter turnout was 10% higher than the historic average which was greater than 3 standard deviations from the mean variations.  Furthermore, six out of ten of the most conservative cities in Macomb County saw ZERO change in the Trump percentage of vote from 2016 to 2020, but Biden received a greater percentage of votes in those cities than Hillary.  For those of you keeping score, that adds up to more than 100% of the vote.  Clearly, there was some massaging of the numbers in Macomb County that strain credulity.

There is evidence that the state voter rolls enabled election fraud significant enough to change the results of the 2020 general election. This is why the citizens of Michigan are demanding an audit of the statewide election results which is their right under Article II Section 4 of the Michigan Constitution.