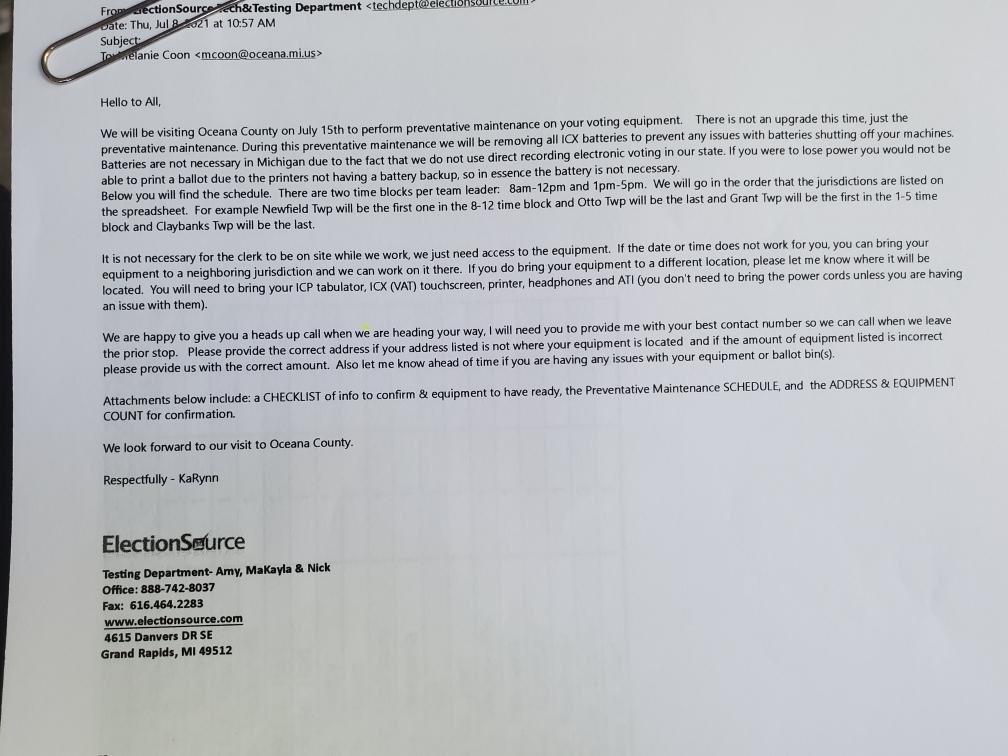 Others are taking note. On July 8, the “Testing Department” at ElectionSource issued the following memo to the Oceana County Chief Deputy and Elections Clerk, Melanie Coon. The memo calls notifies Ms. Coon that ElectionSource will be visiting Oceana County to “perform preventative maintenance” on their ICX equipment. It is unclear what condition they are seeking to “prevent”. They state that they intend to remove batteries to avoid shutting off the machines. In most electronic equipment, the removal of batteries would actually lead to the shutting down of machines.

ElectionSource then goes to state that “it is not necessary for the clerk to be on site while we work”. How would the clerk confirm that no equipment tampering had occurred if they are not present?

It should be noted that this “preventive maintenance” extends beyond the machines in Oceana County. Attorney Stefanie Lambert revealed this same activity in Osceola County on The Gateway Pundit. A cease and desist letter has been issued by Attorney Matt DePerno in response to these activities. It is clear that tampering with the configuration of election machines would significantly impede the Antrim County lawsuit on appeal by Matt DePerno. The tampering would also significantly impair the pending forensic audit in Michigan.

So, who is ElectionSource and why are they tampering with election equipment?

Despite claiming to have a contract with the State of Michigan on their company website, I have been unable to obtain a copy of that contract. It is more likely that ElectionSource is operating on behalf of a contract they have with Dominion Voting Systems. Such an arrangement would make it more difficult to obtain data on the scope of their services pertaining to Dominion Voting Systems. In the State of Michigan contract with Dominion, the following ICX equipment and price list can be found.

ICX equipment is the focus of the “preventative maintenance” performed by ElectionSource per their memo. The ICX equipment has three basic functions:

Clearly, the settings for these functions would be of significant interest in a forensic audit.

A more complete description of ICX equipment as defined in the Dominion Contract with the State of Michigan can be seen below:

When the ICX power source is removed, it is likely to trigger changes to the machine configuration that go beyond the removal of the battery. The ICX startup procedure provides some clues as to what changes are likely. This procedure initializes all hardware and all software modules and all external election files as a consequence of the following steps:

According to the State of Michigan contract with Dominion, the official “Preventative Maintenance Checklist” is as follows:

Please note that battery removal is not specified in this “Preventative Maintenance Checklist”. Clearly, the “maintenance” visit to Michigan counties was not consistent with their checklist. This begs the question, why did they refer to the visits as “preventative maintenance?”

Election officials are required to secure election records for 22 months per federal law. It is clear from the memo above that Election Source intends to modify the configuration of election equipment prior to the end of this period (September 3, 2022) which is a clear violation of federal law. As the momentum builds for a forensic audit of the election in Michigan, it is clear that attempts to tamper with the integrity of election records will ramp up as well.