The Case for Decertification of Michigan Election Results 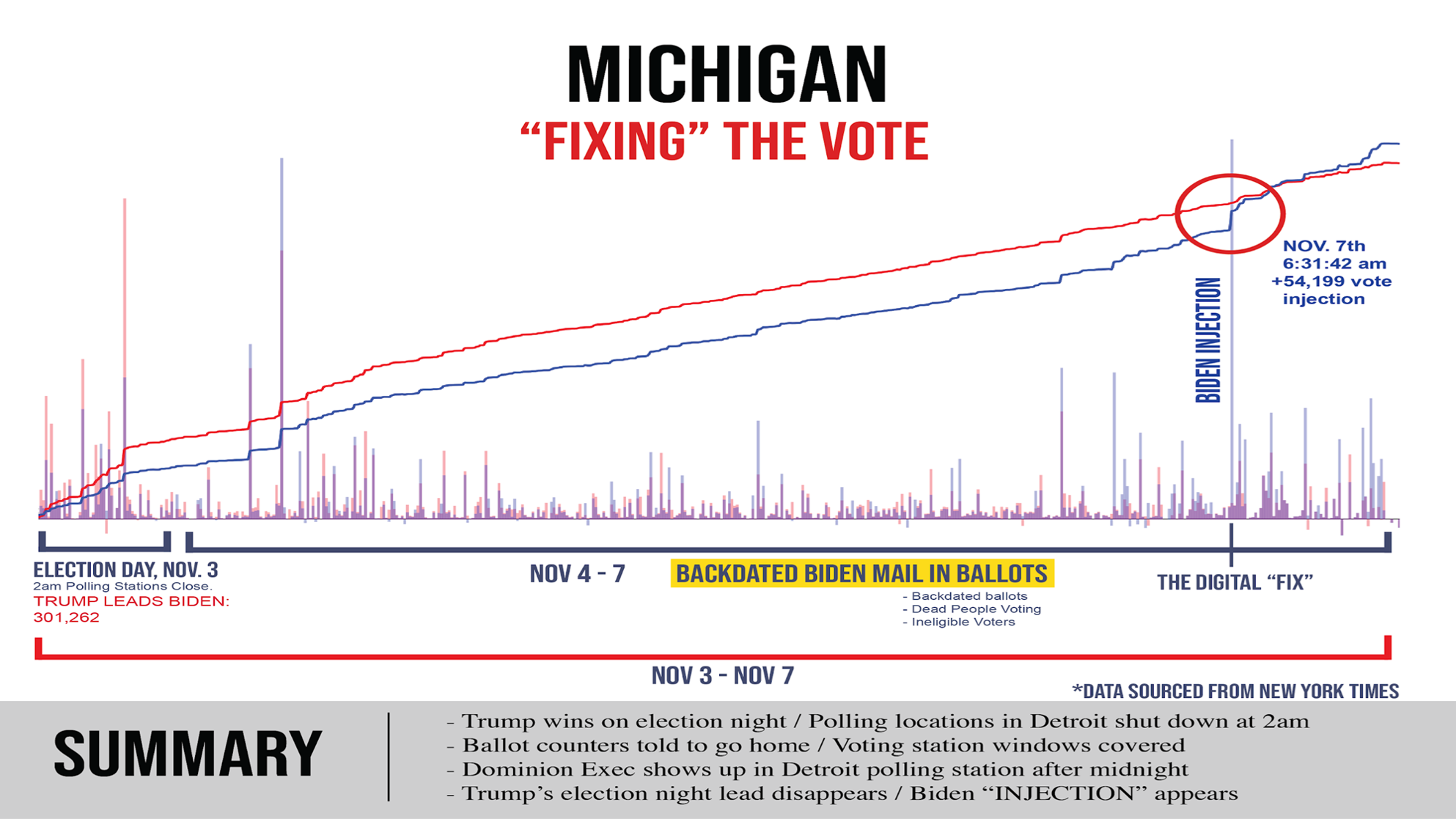 We have heard persistent refrains from the media and complicit elected officials that “there is no evidence of election fraud” in the 2020 election. That is simply not true.

I was a Poll Challenger at the Detroit Absentee Voter Counting Board on election night. In addition to my own affidavits pertaining to substantive breakage in the chain of custody pertaining to vote tallies, I have read hundreds of affidavits attesting to election fraud…in Michigan alone.

Whenever there are attempts to convey this election fraud to the general public, big tech censors the information or “supplements” it with propaganda dismissive of the claims.

These claims of election fraud should not be dismissed. They should be investigated in all of the battleground states as a minimum. Instead, they have been actively suppressed by elected officials in all branches of our government. If these officials truly believe there is no election fraud, why would they take such draconian measures to suppress a transparent review of these allegations? Short answer…because they are not interested in the truth.

I am interested in the truth. That is why I have continued to investigate claims of election fraud.

Upon my review of the affidavits at my disposal, I have prepared what I believe is a compelling case for the decertification of the Michigan election.

The Qualified Voter File (QVF) or Voter Registration Database is a list of people maintained by the Secretary of State who are eligible to vote in elections held within that state.

Some of the reasons to assert that the QVF link in the Chain of Custody is broken are:

Poll books are time-stamped, precinct-specific extracts of the Qualified Voter File. Poll books are used by Poll Workers to verify the identity of a voter and that the voter is eligible to vote.

Some of the reasons to assert that the Poll Book link in the Chain of Custody is broken are:

Ballots are the means of casting one’s vote. Voter intentions are captured via paper ballots which are translated into scanned images or direct electronic data entry via tablet devices.

Some of the reasons to assert that the Ballot link in the Chain of Custody is broken are:

Vote tallies are the final objective in the Chain of Custody. Precinct vote tallies are aggregated by municipalities, counties, states and nationally for federal elections.

Some of the reasons to assert that the Vote Tally link in the Chain of Custody is broken are:

Statute is another term for law. Violations of state and federal election statute are violations of the law with all of the associated penalties.

Some of the statutory violations observed in Michigan are as follows:

We live in a constitutional republic. Our state and federal constitutions form the basis of our system of government. Any time our rights under the constitution have been infringed, it merits rectification.

Some of the constitutional violations observed in Michigan are as follows:

Some of the Boards of Canvassers issues observed in Michigan are as follows:

Dominion Voting Systems were used in 65 out of 83 counties in Michigan.

Some of the documented vulnerabilities of Dominion Voting Systems are as follows:

Use of COVID To Subvert Election Integrity

The COVID outbreak resulted in a significant amount of fear and suffering across America.

Some of the examples of how the COVID outbreak was used to subvert the integrity of the election in Michigan are as follows:

Additional information related to each of these claims can be found in the the document below. This document has been shared with both state and federal elected officials. Please share as you are able.

The best way to dispel the brewing division in our nation over the election results is to pursue an emergency forensic audit of the paper AND electronic election materials for the battleground states.

If the audit reveals that all of the concerns cited in this Case for MI Decertification are invalidated, so be it. Detractors of the analysis can continue having a field day mocking such analyses as the products of tin-foiled hat conspiracy theorists.

If the audit reveals that these concerns are indeed valid, though, the results of the 2020 Election should be decertified.

86 thoughts on “The Case for Decertification of Michigan Election Results”