Fake Election Over, Fake Audit Season Begins: What Can Be Done? 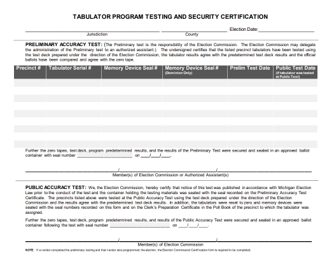 MI Board of County Canvassers ManualDownload

So, what exactly does the process of “canvassing” entail?

Canvassing is a process which ensures that the proper execution of election processes has been completed via examination of election records. In practical terms, the process of canvassing is simply the election version of what accountants would call an audit except that it is conducted by the Board of Canvassers.

There is significant variation as to the degree of discipline applied to these canvassing examinations. In practice, the canvas examination is focused primarily on the act of verifying that the number of votes cast in a precinct per the poll book equals the number of ballots. In order to truly ensure that a proper execution of election processes has been completed, however, a canvass would need to ensure that the integrity of each link in the election record chain of custody specific to that jurisdiction has been verified.

The lack of definition around what is specifically meant by “canvassing” invites the application of significant political pressure to canvassers to certify the vote. After all, voters and candidates alike are always anxious to learn the results of the election. They want the results as soon as possible. This translates to “rubber stamp” certification votes which do not have election integrity as their number one priority.

To make matters worse, once an election has been “certified” there is significant political pressure applied to accept the results and “just move on”. If the election processes were indeed conducted in a manner which maintained the chain of custody, accepting the results makes perfect sense. If, however, there is significant evidence of breakage in the links involved with the election chain of custody, such political pressures leave little room for courts to pursue allegations of fraud prior to a candidate taking office. In other words, canvassing which lacks a rigorous examination of the election chain of custody can be used to facilitate the theft of an election from voters.

Our second line of defense against election fraud is to conduct an audit. In Michigan, our Constitution guarantees our citizens the right to an election audit.

The only statutory requirements pertinent to the conduct of an audit are found in MCL 168.31a.

(1) In order to ensure compliance with the provisions of this act, after each election the secretary of state may audit election precincts.

In addition to a lack of any specificity as to chain of custody examination, Michigan statute stipulates that audits are conducted “Post-Election”. In other words, under Michigan law, audits, unless ordered by a court, are not a tool for evaluating election integrity prior to certifying election results beyond the poorly defined and politically influenced canvassing process. In most cases, we are limited to post-election audits to get to the bottom of any election fraud which may have occurred in a previous election.

An audit of election chain of custody is an important tool, but it needs to be of sufficient quality to be able to discern whether or not election fraud has occurred.

The following files provide the guidelines for the conduct of an election audit in the State of Michigan:

The findings and corrective actions generated from a real audit not only highlight any improprieties in previous elections which may involve criminal wrongdoing, they serve as the basis for true reforms for future elections.

So, pre or post-election, would Michigan audit guidelines be sufficient to identify election fraud? Let’s look at specific examples of election fraud in Michigan for which there are signed affidavits from certified Poll Challengers.

Does the state Audit Checklist encourage sufficient rigor for an auditor to be able to identify any of the fraud which was observed in the 2020 election?

Summary of Michigan election fraud related to chain of custody.

So, out of the 15 examples of breakages in the election chain of custody, ZERO of them have a reasonable chance of being addressed, much less discovered, by adherence to the audit guidelines currently in place. ZERO. Fake audits are not the remedy for fake elections.

Our election system is broken.

A true audit with sufficient rigor to address the breaks in the links of the election chain of custody would go a long way towards repairing our election system. If our legislators and Governors were truly interested in repairing our election system, they could demonstrate their sincerity by requiring audits to have sufficient rigor to include the means of discovery cited above. Failure to do so indicates that they are simply “going through the motions”.

14 thoughts on “Fake Election Over, Fake Audit Season Begins: What Can Be Done?”