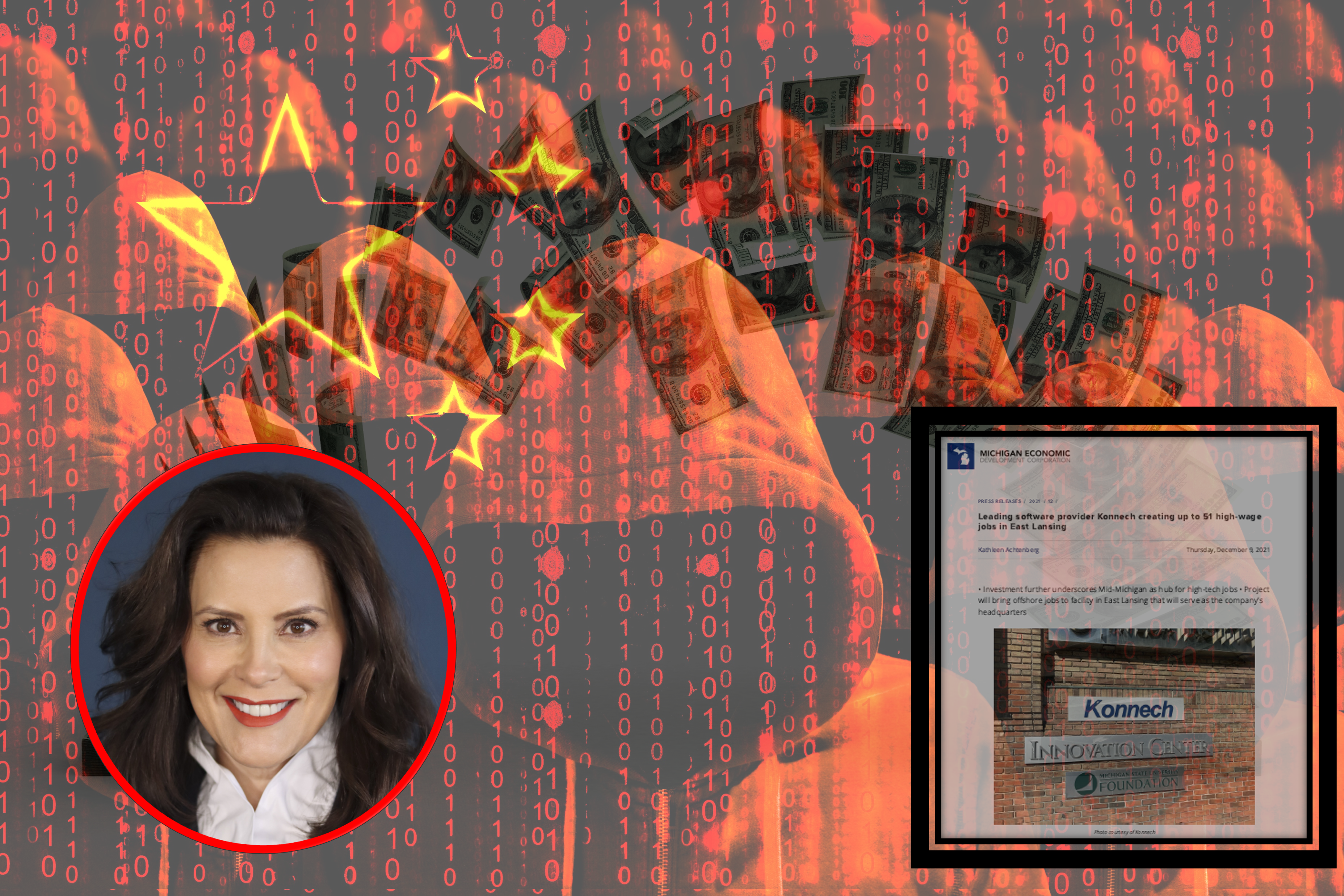 On December 9, 2021, the Michigan Economic Development Corporation under the direction of Michigan Governor Gretchen Whitmer released the following press release:

Good luck finding it now. It has been deleted. So has their reference to Konnech Inc as one of their “Success Stories” which was captured on the LinkedIn profile of Konnech CEO, Eugene Yu.

It certainly appears that Governor Whitmer is trying hide her connections with Konnech such as her $306,000 grant to them announced on December 9, 2021.

Why would she want to hide such a grant? While fiscally-minded individuals might be tempted to think that she is attempting to hide the fact that she approved a $306,000 grant of taxpayer money to reap a $293,610 benefit (Net loss of $12,390), I believe the real reason has something to do with the following news first shared by Brian Lupo writing for The Gateway Pundit:

Why would this arrest send Governor Whitmer and her team into full cover-up mode?

The name Eugene Yu and the company he formed called Konnech first became a topic of concern as a result of the findings of True the Vote leaders Catherine Engelbrecht and Gregg Phillips during their August 13, 2022 “PIT” briefing.

During the PIT brief, Catherine and Gregg revealed how they discovered that Konnech’s Poll Chief software enabled the transfer of 1.8M poll worker records to servers managed by Chinese Communist Party intelligence agents. In addition to putting the personal information of U.S. citizens in the hands of a malicious third party, the transfer of this data indicated that Chinese intelligence agents had access to sensitive information regarding elections in the United States. Upon discovering this information, Catherine and Gregg contacted the FBI and shared their discoveries with them. The arrest cited in the Gateway Pundit article is likely a direct result of this collaboration.

Why is LA County so significant? The following software architecture diagram may provide an important clue. This diagram shows Konnech Poll Chief software integrating directly with LA County’s Election Management System. While LA County uses an Election Management System called Voting System for All People (VSAP), this diagram could easily serve as a template for integration with more well known voting systems such as Dominion and ES&S. Regardless of the system connected to Poll Chief, however, the data Poll Chief has access to as a result of this connection is quite concerning.

What other data would the Chinese intelligence service likely have access to in LA County based upon this layout of their election management system?

Why is this concerning? Because True the Vote has already discovered that Poll Chief enabled the transfer of poll worker information to the Chinese intelligence service.

Do you honestly think that the CCP would stop after collecting data on 1.8M poll workers?

Another investigator who goes by the name “Kanekoa the Great” provided significant insights into the motivations of Eugene Wu in the following story.

In particular, I would like to highlight the following discovery highlighted by Kanekoa but originally found by another independent investigator:

This would seem to indicate that Mr. Wu’s professional interests were closely aligned to the political interests of the Chinese Communist Party.

As a minimum, the arrest of Konnech CEO Eugene Wu ostensibly for possession and transmission of sensitive data on 1.8M poll workers to the CCP provides Chinese intelligence officials with the information needed to significantly influence elections in America.

If further investigations reveal that the Konnech “connections” also enabled manipulation of election records, these revelations would indicate even more significant charges such as espionage, treason or even an act of war.

Governor Whitmer provided what appears to be a Chinese Communist Party intelligence operation with $306,000 of Michigan taxpayer funds.

Perhaps this is why Governor Gretchen Whitmer is attempt to sweep all of her connections with Konnech under the rug before the November 8th election.

She should know by now, though. The internet never forgets.