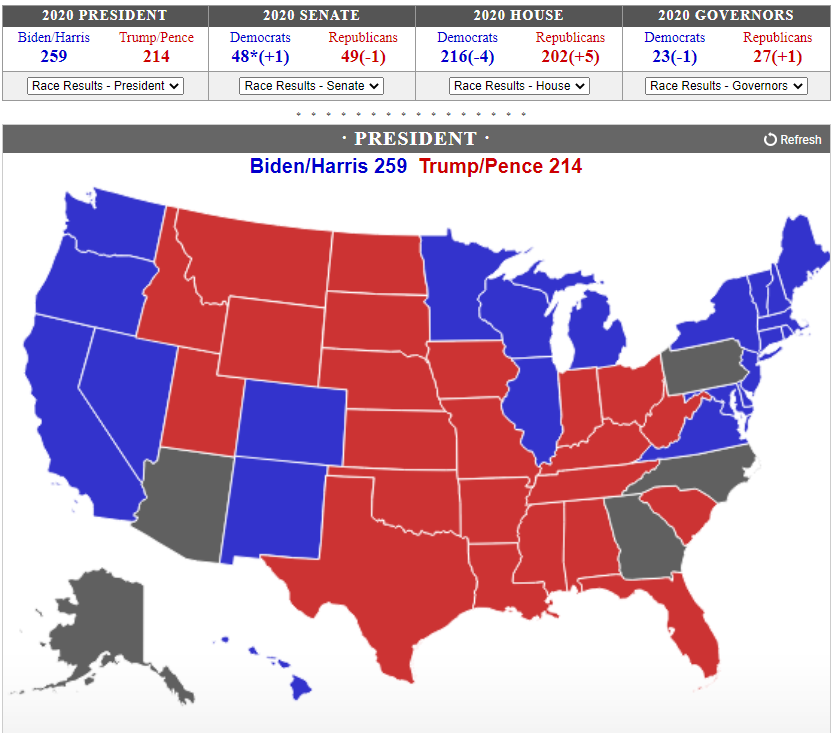 Media narrative aside, we still don’t know who our next President will be.

According to Real Clear Politics, Biden is at a projected 259 Electoral College vote tally and Trump is at 214. They show that the following states are still in play for President Trump: Arizona, Georgia, North Carolina, Pennsylvania, and Alaska.

Should Michigan be in play as well? Upon evaluation of the data and observed “software glitches”, I believe the answer is “Yes”.

In Antrim County, Michigan, 22,082 people voted in the 2020 General Election via a Dominion Voting System that has been blamed for “software glitches” that flipped 6,000 votes from Trump to Biden. Upon recognizing the glitch, a hand recount yielded a final vote tally of 9,748 votes for President Trump and 5,960 votes for Vice President Biden. The 6,000 votes flipped due to a “software glitch” represented 38% of the total vote tally for Antrim County.

Yes, a 38% vote flip would seem to be extremely easy to detect. What if voters, poll workers and poll challengers in the other 46 counties were not as attentive? What if this “software glitch” happened elsewhere but simply went unnoticed?

Could an undetected “software glitch” explain how a deficit of 146,123 votes could be overcome? Yes. Remember, if the “glitch” merely flipped votes, only 73,062 votes need to be impacted.

A 38% vote flip in Wayne County would move 327,491 votes to Trump and away from Biden which is significantly more than the 73,062 votes needed.

A 38% vote flip in just the City of Detroit alone would move 95,052 votes to Trump and away from Biden which is still more than the 73,062 votes needed.

What “software glitch” vote flip percentage would be needed in Detroit to overcome the 146,123 projected deficit for President Trump? 29%.

What if the “software glitch” occurred statewide under Democrat Secretary of State Jocelyn Benson who is responsible for reporting statewide results? What percentage would then be needed to overcome the deficit? Only 1.3%.

OK…by now you have probably concluded that this is simply a number chase pipe dream by those who seek to ensure that President Trump remains in office another four years. Before you jump to this conclusion, however, please consider the following “anomalies”:

What if these “software glitches” were not limited to Michigan? Dominion Voting Systems are used in 33 states across America including the following battleground states: Georgia, Arizona, Pennsylvania, and Nevada.

What do all these numbers add up to?

The 2020 Presidential Election is FAR from over.

Senator Colbeck, We have been watching you on war room and I feel the Republicans are selling out the people of Michigan, our constitution and quite frankly President Trump. Either they are ignorant of there duties or they are part of it all.

There should be a simple counting machine for votes it should be no more than a calculator and all absentee ballots should have the notarized envelope attached to the ballot or have the ballot itself notarized anything less than a notarized signature SHOULD NOT BE COUNTED. Ballot harvesting and mailing out ballots to people to fill out is ridiculous if people cannot take the time to do an absentee ballot or go vote in person then they don’t vote period. I am so tired of cheaters in this world there has to. e accountability and there has to be prosecution for those at the top who do wrong. After all doesn’t Polosi keep saying no one is above the law then why are they above the law why does the democrats get away with cheating and murdering and prosecuting innocent people. I sure wish the Republicans would stand up with Trump against these people. I tell you right now if they keep getting away with this then don’t be surprised if some people try to take the law into their own hands cause I know if I am sick of it I know there are more than 1,000 or more others sick of it and they are waiting and watching so be sure these issues get resolved or we will end up with a revolution because people are tired of taking the crap these young liberals are feeding us.