How Technology May Have Enabled Tampering With Election Results 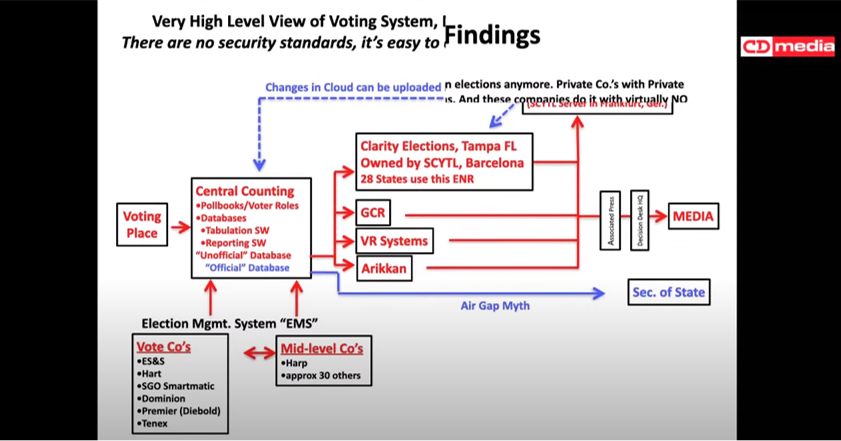 Joe Biden the 46th President of the United States? Not so fast.

There are two political threads at work in the battle for America.

We are in a race. The media is pushing the narrative that Joe Biden has won. The longer they are allowed to push this narrative, the more likely it is that most Americans will roll over and accept their proclamation. Meanwhile, there is a push to expose the truth about the subversion of election integrity by the Biden campaign and their accomplices. Will America rollover before the truth is exposed? That remains to be seen.

The media thread is already engaged at light speed. The legal thread is a much slower burn. One of the reasons why the legal thread is slower is simply a facet of the nature of the judicial system. In this case, however, there is an additional contributor to this slowness. The most significant facets of election integrity subversion in the 2020 election are complicated and involve sophisticated information technology systems.

Many of us have heard of the “software glitch” in Antrim County, Michigan that resulted in a 6,000 vote swing in favor of Joe Biden. The same software system by Dominion Systems was deployed in 47 out of Michigan’s 83 counties for the 2020 election cycle. It is indeterminate as to how many other “glitches” went undetected in Michigan and other states for that matter. In fact, there is evidence of a concerted effort to cover up evidence of these “glitches”.

The video “Information Operation” provides a substantive review of the technology behind our voting systems. It provides significant insights into how these systemic “glitches” threaten the integrity of our elections including evidence of fraud witnessed in previous elections such as the 2018 Election in Texas featuring Cruz v Beto.

Clearly, as our dependence upon technology increases, it appears that the security of our elections decreases.

In the video, security expert Russell Ramsland warns us that votes can be changed via multiple mechanisms including:

The 334 page Everest Report referenced in the CDMedia provides a comprehensive analysis of vulnerabilities in our voting systems.

In Detroit during the 2020 Election, there was evidence that the Absentee Voting Counting Board computers were all connected to the internet. This network access greatly increases the vulnerability of the election system to nefarious adjustments to vote tallies.

So how can we protect the integrity of the election today? Dr. Shiva explains the key information we need in the following video.

Election officials are bound by Federal Law to maintain a record of election artifacts. If they fail to secure these artifacts, the entire election may be nullified by a Federal Court.

Could it be that software developed by the CIA to influence elections outside of the United States has now been weaponized against America? Find out in the following video featuring Former NSA Senior Analyst, Kirk Wiebe.

So what does all this mean for the integrity of the 2020 Election? Time will tell. There are lawsuits in works to expose exactly whether or not systems such as the “Hammer” or “Scorecard” have been leveraged to change vote tallies in America.

For now, we are in a race. Will the legal system validate claims of election fraud before Americans weary of the uncertainty of the election results? Stay tuned.