Anatomy of a CNN Hit Job 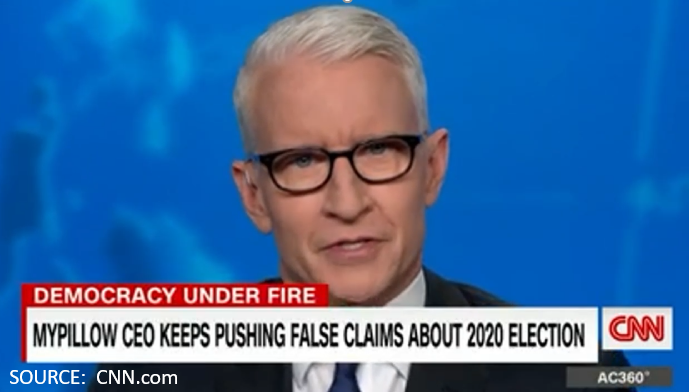 Censorship, false narratives, and pure propaganda are now the guiding principles for all too many traditional news outlets. Perhaps no news outlet better represents these principles better than CNN. Project Veritas provided a series of exposes on how CNN embodies these principles in their broadcasts.

This combination of market footprint and political agenda is an abuse of the freedom of the press guaranteed under our first amendment and a threat to the integrity of our constitutional republic. Media outlets such as CNN have been weaponized against every day citizens in accordance with the Rules for Radicals espoused by progressive icon Saul Alinsky.

“Pick the target, freeze it, personalize it, and polarize it. “

The following story by CNN is a prime example of this rule in action. Who is the target? Mike Lindell.

The claims made in this story and related stories on CNN are as follows:

Let’s look at the validity of these claims in a bit more detail than was addressed by CNN.

“Not connected to the internet”

Internet connectivity for electronic voting systems is frequently denied by election officials. This denial flies in the face of overwhelming evidence to the contrary. Here’s a few samples to get the ball rolling.

Despite denials from Dominion Voting System CEO John Poulus during his MI Senate testimony, denials from Detroit election officials to certified poll challengers, and denials by media outlets like CNN, there is ample evidence of our electronic voting systems being connected to the internet.

CNN asserts that Mike Lindell doesn’t understand election processes. I can only presume this assertion is based upon their previous assertion that the voting systems were not connected to the internet because election officials told them they weren’t. Not exactly a shining example of investigative journalism.

I would recommend asking CNN commentators as well as organizations sympathetic to their narrative substantive questions about their own knowledge of election processes. Start with Questions for Election Officials.

Deliberate modification or deletion of election records within 22 months of an election is a violation of USC Title 52 Section 20702.

By saying they “talked with cyber experts”, CNN attempts to give the impression that they had a substantive discussion of electronic voting system experts regarding whether or not the cyber attacks claimed by Mike Lindell were even possible. If they did have such a conversation, it was not evident from their story. Why do I have doubts? I first heard about the cyber attack vulnerabilities of our electronic voting system from their experts.

Professor J. Alex Halderman from my Alma Mater, the University of Michigan, issued the following report on behalf of the defense in Bailey v Antrim County.

In his report, he made the following assertions in reference to an earlier report by the Allied Security Operations Group (ASOG) issued on behalf of the plaintiff, William Bailey.

“The report is correct that the EMS is missing important Windows security updates, potentially leaving it vulnerable to various methods of attack (¶I.2). The system is running Windows 10 version 1607, which was released in 2016, and it appears not to have had any updates installed for at least two years. The antivirus definitions are similarly out of date.”

“The report is correct that Dominion scanners have the ability to be connected to external networks (¶B.20). Some Michigan jurisdictions use this functionality to transmit preliminary results to their EMSes using wireless modems. Connecting scanners or EMSes to the Internet or other external networks creates significant risks. According to the Michigan Election Security Advisory Commission, it is possible that unofficial results could be intercepted or manipulated, that the locality’s election management system server could be attacked remotely over the network, or that optical scanners could themselves be remotely attacked” [25]. For these reasons, the Commission recommended that jurisdictions discontinue wireless result transmission.”

“Although Logic & Accuracy testing cannot protect against sophisticated attacks on voting equipment [10], it should prevent both accidental and deliberate scanner configuration errors.”

These statements would seem to indicate that a cyber attack of the sort claimed by Mike Lindell is indeed possible in light of the electronic voting system in place in Antrim County for the November 3, 2020 election.

Harry Hursti is another one of the cyber experts cited by CNN in their story. In the HBO Documentary “Kill Chain” released just months before the 2020 election, Mr. Hursti shares a significant number of concerns pertaining to electronic voting systems. In the following clip, he notes how the Election Assistance Commission (EAC) provides one-stop shopping for any actor seeming to interfere with our elections.

“It’s damaging to our democracy. Spurious allegations spread on the internet because they affirm what you want to believe.”

Concerns with electronic voting systems did not start in the wake of the 2020 election. In addition to the clarion cries of the cyber experts cited earlier, many of those complicit with CNN’s tactics voiced these concerns well before the 2020 election.

Instead, Americans are being divided. CNN now labels those who cite concerns with election fraud as “conspiracy theorists”. They are teeing up a narrative that characterizes those concerned with election fraud as domestic terrorists. Would you like proof of this assertion? Read the following Bulletin from the Department of Homeland Security.

I for one believe it is demonstrably more damaging to our democracy to silence free speech and the rights of our citizens to petition the government for redress of grievances.

Don’t believe the mainstream news narratives. Do your own research until you find a news source you trust…and even then, be sure to verify as often as possible.