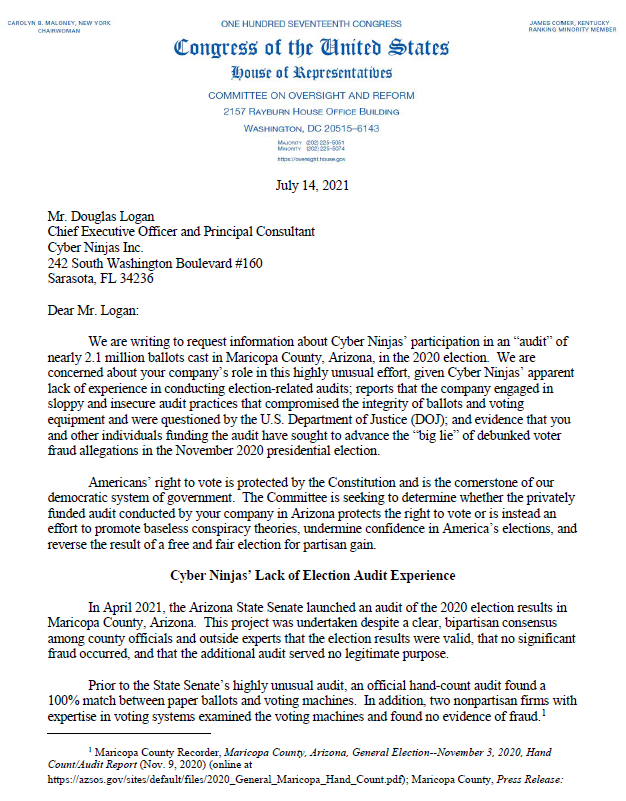 On July 14, 2021, Congresswoman Carolyn B. Maloney (D) and Congressman Jamie Raskin (D) submitted a letter using the U.S. House Committee on Oversight Reform letterhead to Mr. Doug Logan, CEO of Cyber Ninjas requesting a significant amount of “information” by July 28. Doug Logan and Cyber Ninjas are now in the midst of compiling an important report regarding their investigation of election fraud in Arizona.

Due to the large volume of data requested, it is reasonable to conclude that either the Committee is seeking the requested information by July 28, 2022 or they are deliberately interfering with the investigation of election fraud in the state of Arizona.

In the Committee’s letter, they cited “Cyber Ninjas’ Lack of Election Audit Experience.”

Nevertheless, the Republican-led State Senate chose to move forward with an additional
audit. Rather than rely on knowledgeable county or state election officials and certified election
experts, they hired a group of private companies led by Cyber Ninjas.4 Cyber Ninjas is a
Florida-based cybersecurity company not federally accredited by the U.S. Election Assistance
Commission to test voting systems.

Letter by Representatives Maloney and Raskin

Why the emphasis upon accreditation by the U.S. Election Assistance Commission (EAC)? The EAC is a key component of a rigged election system designed to keep independent firms such as Cyber Ninjas out of the election investigation mix. In May of 2019, The EAC hired two “experts” to oversee its voting system certification program. Who did they hire? Jessica Bowers and Paul Aumayr. Paul Aumayr is a former Maryland election official. Jessica Bowers is the former director of certification at Dominion Voting Systems.

It was not immediately clear how the EAC might mitigate any potential conflicts of interest that could arise with hiring Bowers, the former director of certification at Dominion Voting Systems, onto the EAC program.

On a totally unrelated topic (insert sarcasm brackets), Dominion Voting Systems are among those certified for use by the EAC for U.S. elections.

Neither of the representatives seeking to investigate Doug Logan have any experience with Arizona elections. On the other hand, the Arizona legislature selected Doug Logan and his company Cyber Ninjas because they deemed they were sufficiently qualified to oversee a forensic audit of their election.

I would submit that the citizens of Arizona and all of the other states in the union for that matter should be very concerned about the lack of election fraud investigative experience for either Rep Maloney or Rep Raskin. Both of them are career politicians. Rep Maloney’s primary claim to fame prior to serving in Congress was to marry a millionaire investment banker and give birth while serving New York’s 7th Council district. Admittedly, this achievement is even more remarkable in light of her 100 performance score from Planned Parenthood. Rep Raskin’s primary claims to fame include his role as the lead impeachment manager for the failed second impeach of President Donald Trump and serving as chair of the Congressional Freethought Caucus which appears to have precluded membership by anyone who thinks there was significant election fraud. There is nothing to indicate significant investigative experience for either of the signatories to the aforementioned letter.

In the Committee’s letter, they cited “Cyber Ninja’s Sloppy and Insecure Audit Practices.” Their letter was clearly intended to look professional. After all, it included a total of 37 sources presumably in support of the various assertions made in their letter. But are their indications that the Committee is itself guilty of “sloppy and insecure investigative” practices?

For starters, I submit the Committee’s own sloppy timing request of “July 28”. Pretty sloppy on the matter of specificity. That didn’t prevent them from making the following assertion in their letter:

Letter by Representatives Maloney and Raskin

Most reasonable observers would concede that the timeline slippage might have more to do with the unceasing legal actions taken by those intent upon obstructing the audit than the investigation practices of Cyber Ninjas.

What about the Committee’s own investigative practices?

Look no further than the failed second impeachment of President Donald J Trump. Their “investigation” was so sloppy that they refused to even examine the articles of impeachment in a Committee in accordance with established procedures. The failure to impeach the President after two attempts is an indication of how sloppy their investigative practices truly are. Remember, Rep Raskin was one of the House Managers for the second impeachment trial.

In the Committee’s letter, they cited “Embrace of Election Conspiracy Theories.”

One would think that the assertion that Joe Biden earned a record 81,282,961 votes while campaigning in his basement should cause reasonable people to question the reported outcome of the election. In fact, it would seem that there was sufficient cause to consider the possibility of a real conspiracy to subvert the integrity election.

As it turns out, there was a conspiracy…just not one that aligns with the Committee’s spin.

“There was a conspiracy unfolding behind the scenes, one that both curtailed the protests and coordinated the resistance from CEOs. Both surprises were the result of an informal alliance between left-wing activists and business titans. The pact was formalized in a terse, little-noticed joint statement of the U.S. Chamber of Commerce and AFL-CIO published on Election Day.”

“The Secret History of the Shadow Campaign That Saved the 2020 Election”, Molly Ball, Time Magazine

Let’s dig a bit deeper to see if there is evidence of this conspiracy in the body of their letter. A total of 37 sources were cited by the Committee members in their footnotes.

A rudimentary analysis of their “sources” reveals the following observations:

A whopping 70.2% (26/37) of their references were from biased media sources – hardly an indication of willingness to pursue the truth. In fact, this observation seems to support another one of the “conspiracy” assertions from the Molly Ball article.

“That’s why the participants want the secret history of the 2020 election told, even though it sounds like a paranoid fever dream–a well-funded cabal of powerful people, ranging across industries and ideologies, working together behind the scenes to influence perceptions, change rules and laws, steer media coverage and control the flow of information.”

“The Secret History of the Shadow Campaign That Saved the 2020 Election”, Molly Ball, Time Magazine

It would seem that the Committee is attempting to “steer” those concerned with election fraud to media sources intent upon influencing “perceptions” in a manner detrimental to a pursuit of the truth.

The Committee closed their letter with a section called “Committee’s Requests”. That’s nice. Especially when they have no constitutional jurisdiction in state election matters.

The first three words of the U.S. Constitution are “We the People”. It turns out that the people have a request of their own – “audit the election”. A recent poll by Rasmussen determined concluded that 55% of Americans support election audits. In contrast, only 4% of the members (2 of 45) of the Committee on Oversight and Reforms signed the letter demanding information from Doug Logan.

Representatives Maloney and Raskin would do well to start listening to their real bosses…”We the People”.

Under Article I Section 4 and Article II Section 1 of the U.S. Constitution, the conduct of elections is a state not a federal matter. Our Constitution clearly delineates that states have authority to define the “times, places, and manner” of elections for Senators and Representatives. It goes on to assert that states have full authority to appoint Electors for President “as the legislature thereof may direct.” In this light, Doug Logan and his Arizona Senate client have every right to tell the Federal Committee to pound sand on matters of election fraud investigations.

Congresswoman Carolyn Maloney and Congressman Jamie Raskin took oaths to support the Constitution, yet they are deliberately inserting themselves into a process in which they have no constitutional authority. In this light, I believe it is they who should be investigated for their “lack of investigatory experience”, “embrace of conspiracy theories”, and their insolent response to demands from citizens all over America for a forensic audit of the 2020 election.

Congress has not been on time with a budget for decades now– they can not use the excuse that board of stupervisors keep filing law suits blocking their budget – so they have no room in which to criticize Cyber Ninjas who have been obstructed evert step of the way and are still on time ! I see only two house members names appear on this –what happened to the rest ?

Just want this nightmare that is the Biden Administration/China to be over with. Severe anxiety over my own & my children’s promising future has set in and I’m beyond worried! I wish it to be done already!

It is time for us all to be active and pick a place to spearhead the truth in the community!

what do these people have to do with State Az. Leave the state alone. Bottom feeders.