How Legislators Can Protect Election Integrity 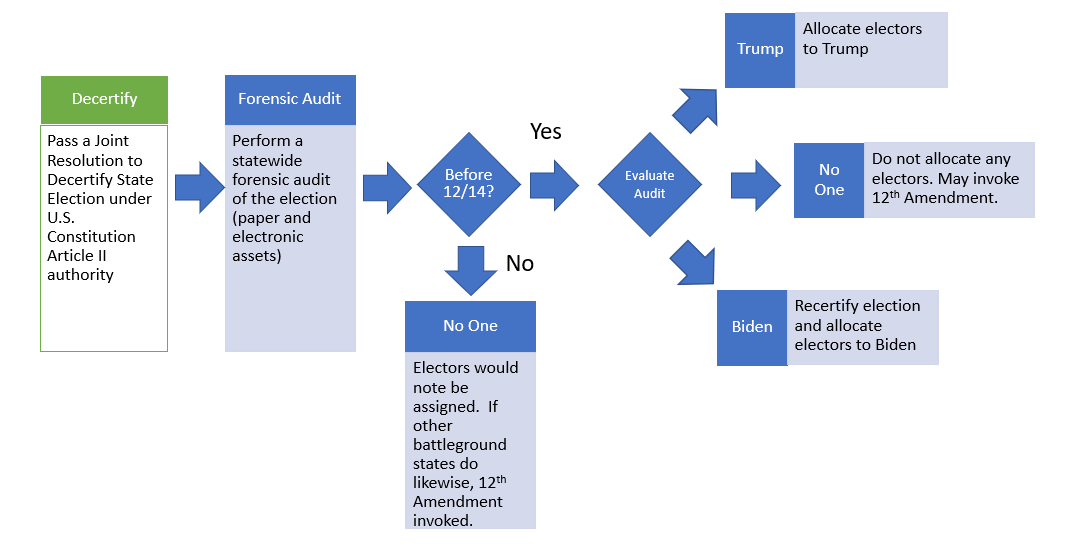 Lawsuit after lawsuit has been filed in our court systems in an attempt to ensure the integrity of our 2020 election, but is there a role for legislators to play? In short, yes. In fact, it is a critical role and it is their constitutional responsibility to fulfil this role.

What is this role?

Each State shall appoint, in such Manner as the Legislature thereof may direct, a Number of Electors, equal to the whole Number of Senators and Representatives to which the State may be entitled in the Congress: but no Senator or Representative, or Person holding an Office of Trust or Profit under the United States, shall be appointed an Elector.

It is the sole responsibility of the state legislatures to appoint electors. This provision of the U.S. Constitution, to which all legislators swore an oath to defend and support, entitles them to right any wrongs in a fraudulent election independent of the court system and independent of their Governor. Any state statutes specific to the appointment of electors are subordinate to the authority granted them under the U.S. Constitution due to the Supremacy Clause.

The steps which can be taken by the legislature are outlined in the diagram below:

Decertification of the election results is the first priority. There is significant evidence of election fraud in the 2020 Election (MI Senate Testimony, MI House Testimony, AZ Legislature Testimony). Certifications of state elections to date have not addressed such fraud as state boards of canvassers are not courts of law. Furthermore, many of the incidents of election process subversion were not allowed to be documented in poll books as required by law. Boards of canvassers could have used these instances of process subversion as justification not to certify the election, but, since Democrat poll inspectors would not allow poll challenger concerns to be entered into the poll books, they were not able to make that argument.

In order to decertify the state elections, each legislature in battleground states featuring significant evidence of election fraud can pass a joint resolution to that effect. Once the election results are decertified, the electoral votes cannot be sent to the Electoral Collage. If there are an insufficient number of electors to reach 270 electoral votes, the determination of the next President and Vice President defaults to the U.S. House of Representatives under the provisions of the 12th Amendment.

and if no person have such majority, then from the persons having the highest numbers not exceeding three on the list of those voted for as President, the House of Representatives shall choose immediately, by ballot, the President. But in choosing the President, the votes shall be taken by states, the representation from each state having one vote;

Decertification is not the only role that can be played by our legislators. They can also request a statewide forensic audit of the election. Why forensic? A forensic audit will examine the complete chain of custody. Furthermore, the scope of so-called “Risk Limited Audits” promoted by some is determined by many of the same tools (e.g. Dominion Voting Systems) which may have been responsible for election fraud.

The bottom line is that our legislators have a significant role in preserving the integrity of our elections. What remains to be seen is whether or not they have enough respect for their oaths of office to take action.

NOTE: Recounts are not an effective option when significant election fraud is evident upstream of ballots in the election chain of custody. See more information on this topic in my post on Chain of Custody.

12 thoughts on “How Legislators Can Protect Election Integrity”